Many jazz musicians are magnificently talented “technically” and amaze audiences with their dexterity and the mastery of their instrument.

But jazz artists who possess that technical skill AND leave the audience feeling as if they’ve had a spiritual experience…well, those are gifted musicians indeed.

That’s exactly what Prince Lengoasa and his quintet did for us at the awesome Orbit Jazz Club in Johannesburg. When we left, my colleague, Micaeli Rourke, turned to me and said, “I feel as if I’ve just had a shower for my soul.”

We had no idea of what to expect when we arrived that night at The Orbit, one of the world’s 193 best jazz clubs according to Downbeat magazine (page 67). The Orbit program listing didn’t go into detail, and the musician profile, while long and detailed, talked more about Prince’s amazing life history than his music.

Even when Orbit co-founder Aymeric Peguillan introduced the band as a blending of gospel and jazz, we still had no idea how powerful the night would be. It became crystal clear when, halfway through the evening, the audience was out of their seats clapping and swaying and smiling and singing along with a song they all clearly knew and loved.

If you watch the video (above and here), you’ll see just how amazingly talented each member of the quintet is. Prince was alternately lively and thoughtful with his trumpet and flugelhorn, pianist Mdu Mtshali played both whisper-soft tunes and wild, ecstatic riffs, saxophonist Percival Mbonani, perhaps the most technically skilled of the group, was incredible with his jaw-dropping solos, drummer Bernice Boikanyo added a special happy, lively spirit, and bassist Sibusiso Sibanyoni delivered a dynamite solo. 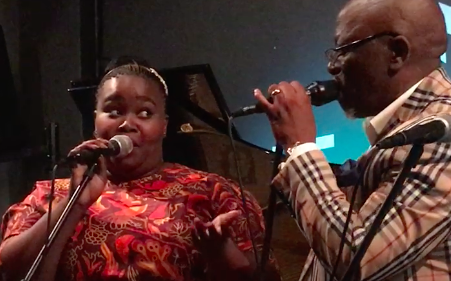 Prince introduced a surprise guest performer — his daughter, Motheo Lengoasa — whose vocals gave the night the vibe of an American revival meeting. Guest pianist Gcina Nhlapo’s incandescent smile, upbeat style and facile keyboard work meant nothing was lost when he sat in for Mdu Mtshali.

The group alternated between avant-garde numbers, classic jazz pieces, and both rocking and soulful gospel tunes. Watch the video and see just how effortlessly they segued from genre to genre.

Prince comes by his musical chops quite honestly, thanks to both innate talent and a father whose Salvation Army band needed a coronet player. At the age of 6, Prince’s dad handed him a coronet and taught him how to use it so he could fill out the band.

Early in his career, Prince became enamored of Louis Armstrong, whose voice he mimics with haunting accuracy. “I love the flugelhorn, and I play the trumpet and coronet. I started with the coronet, and Louis Armstrong, his first instrument was the coronet, so there is some relationship there. He’s got that song “Coronet Chop Suey”, and, I don’t know why, but for some reason I’ve always had this relationship with him and, who knows, perhaps his spirit lives in me!”

Why does Prince play the way he does? Well, watch the video and hear Prince talk about why he plays jazz and gospel, the relationship between jazz and church music, what he’s thinking about when he’s off on a riff, and the message he’s trying to send with his music.

And if you’re ever in Joburg and Prince is playing somewhere, do yourself (and your soul) a favor and go hear him!

THE VENUE: The Orbit Jazz Club is almost the perfect jazz club. New York clubs seem to pride themselves on their gritty, dark atmosphere (except, of course, the upscale clubs like Dizzy’s, which are almost too pristine). The Orbit is clean, but not too clean, has fantastic acoustics, a jazz club atmosphere without old sticky beer on the floor, great food, excellent drinks, terrific sight lines from every table, music six nights a week, and incredible talent. The only knock is that, being just two years old, it still feels a bit new.

THE GIG SCHEDULE:  Here’s where to find out who’s playing

THE DRINKS & THE FOOD: I can’t talk about drinks, but the beer is good if you’re OK with a limited choice. The wine and spirits and the dining options are much better (here’s the menu for both)