Over his career, Herb has performed at the White House, Dizzy’s Coca-Cola Club in New York City, the Lincoln Center, and Baker’s Keyboard Lounge in Detroit, among many others,

But it all began with his pencil saxophone.

When Herb was ten years old, a local church created an after-school program, including a music center in the basement.

“So I went to the music center and I  remember my first day, I had the option of going to a carnival or taking lessons, and I wanted to take lessons,” Herb remembered. “But I didn’t even have a saxophone.

“So the executive director of the program, Rhonda Buckley, demonstrated how to play a saxophone on a pencil,” he recalled.

She made marks on the pencil. “Then she said I’m going to show you how to play the saxophone: ‘These first three fingers here, one, two, three, and then one, two, three. So I went home and practiced on a pencil until the next week, when she got me a saxophone, a used saxophone. 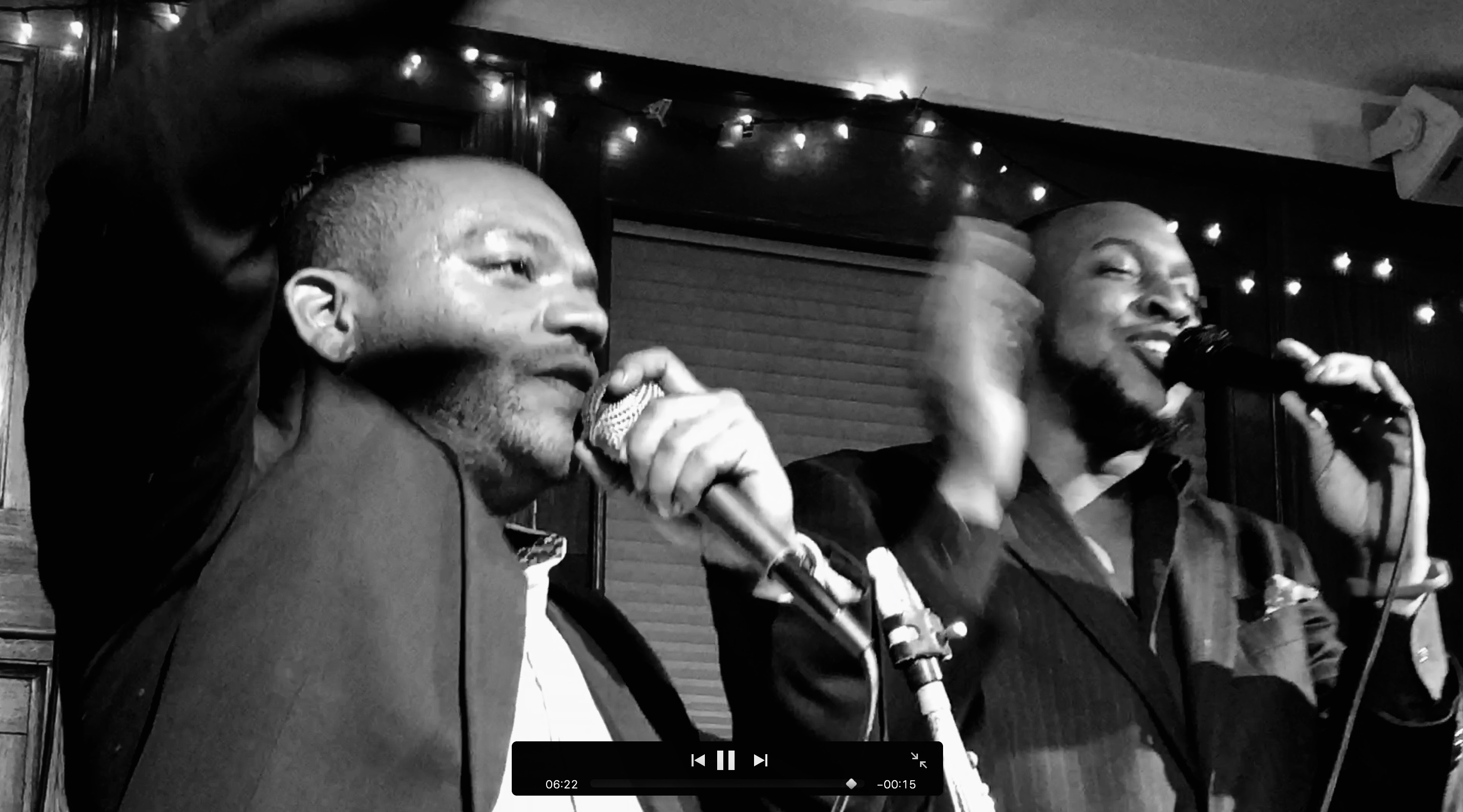 “That woman [Buckley] is still my mentor today,” Herb said. “The saxophone I am playing tonight is her saxophone.”

Herb quickly became an ardent proponent of jazz as a serious art form. And it shows.

The evening I attended was a bit raucous, with many in the audience conversing loudly while Herb’s Jazz Jam band played. He was not happy. “When you are on stage and you’re baring your soul, it is important for people to be aware and be listening and give you respect not only because it is difficult but because this is a rich art form that we want to be taken seriously,” Herb said.

“This is serious music,” he said. “It doesn’t mean you can’t laugh and have fun, but you have to let people know this is something serious. If I have to tell you [the audience] to shut the fuck up, I will tell you to shut the fuck up. Period. Point blank.”

“No—it deserves the same level of respect,” he said. “I think they listened and they benefited and they were able to receive.

“They can have their conversations outside of here, but once that solo is over, it’s not ever going to sound the same again. I can’t repeat what I just did.”

Herb and his Capitol Hill Jazz Jam co-host Aaron Myers share that passion for Jazz but they take it further than many, if not most, other musicians. They use their musical platform to advocate for change.

Using the Jazz Jam as their base, Herb and Aaron created the Capitol Hill Jazz Foundation whose mission is to “make full use of jazz as a strategic tool of economic development in Washington.

“Through action in performance, education, and advocacy, CHJF seeks to improve the viability of jazz livelihoods and performance venues, revitalize the appreciation for the genre by fortifying jazz education, advocate for the economic and cultural development of the community,” according to the mission statement.

To make it happen, they created the Jazz Lobby to engage with government officials and agencies on both the local and national level to advocate on behalf of the D.C. jazz community and the community at large.

“If I can connect with the audience on stage, giving a great performance, and I can leave that stage and the next morning go and talk to a council person, a chamber of commerce person, or a congressperson, and lend my voice to certain issues that can alleviate some pain and anguish, end ‘othering’, end stigmas, aid those who’re marginalized—using my platform to influence the decision-makers to consider those who have been left out—then I have done my job properly.

“If I have been an example to other musicians on how to do that, then you will have more change happening, which is what we need more of in my opinion,” Aaron said.

At the weekly Jazz Jam, Herb and Aaron preside over a lively, fun  mix of the exquisite musicianship of the Jazz Jam band followed by an eclectic collection of musicians dropping in to jam (the night I was there, a tourist from Scotland jumped in with his own horn along with some locals).

Music is Herb’s life. “Music to me is a backdrop to life—it is the thing that creates and maintains my memories’” he said. “A song will bring back a level of emotion and feeling that I would never get from just reading a passage because music is intangible—you have to be open to receiving.”

That’s especially true in Jazz improvisation. “The number one thing [in Jazz} is improvisation—it is central to Jazz,” Herb said. “In rock and pop, the song is the focus, and the melody, and it is played throughout. In Jazz, the melody is played in the beginning and in between the solos.”

“Like the human spirit, it is not pre-determined,” he said. “That’s the beauty of it.”

(As of July 8, 2020, Mr. Henry’s is open for outdoor dining, but the Wednesday Jazz Jams are now virtual on Facebook (see link above). They also have other virtual musical shows every day of the week and those are listed on their website at: http://www.mrhenrysdc.com/)

Mr. Henry’s is famous for a lot of things as one of the centers of the D.C. but the story that really stands out is that it was the launch pad for Roberta Flack’s career.

“In 1966 founder Henry Yaffe bought the establishment at Pennsylvania Avenue and 6th Street SE, a country-western bar then called The 601 Club, and, without closing, “Mr. Henry,” as he came to be known, remodeled the space to the wood-paneled pub you see today,” according to the website.

“Two years later Mr. Henry hired a local school teacher to sing in the pub. ‘She told me that if I could give her work three nights a week, she could quit teaching,’ Henry recalled. Before long an upstairs performance area was constructed just for her, with oak paneling rescued from the Dodge Hotel before its demolition. This singer, none other than Roberta Flack, would go on to win four Grammys for the songs “Killing Me Softly” and “The First Time Ever I Saw Your Face.”

With its unique vibe of locals’ bar/soul nightclub, Henry’s drew a diverse crowd of a demographic mix atypical of the Sixties. Noteworthy guests such as Eddie Harris, Ramsey Lewis, Johnny Mathis, Carmen McRae, and Burt Bacharach were in regular attendance at Mr. Henry’s, to name but a few. Flack would often share her stage and piano bench with them, even playing with Liberace one night.”