THE ORBIT, JOHANNESBURG — Having just left New York City’s rich jazz scene, I was snootily prepared for some good but not great jazz at The Orbit in downtown Johannesburg.

Just watch the opening of the video at the top of this post, and you’ll see what I mean. Two jazz bands delivered modern jazz as nuanced and soulful and powerful and exquisitely executed as any band I’d seen recently in NYC.

The level of musicianship (is that a word?) was stunning. Each member of the band, but especially the drummer, put their entire beings into the music. When it came to their solos, they weren’t in Johannesburg anymore. I don’t know where they were, but you can see in the video above that in their minds they were in a very special place indeed. 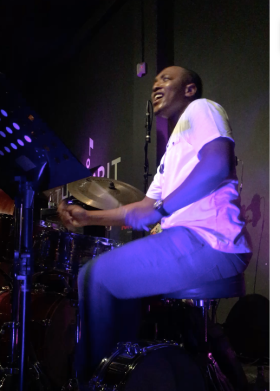 One of the consistently surprising elements of the Joburg music scene (at least to a white U.S. citizen) is the remarkable diversity of the crowds. In a country with a very recent (30 years ago) history of violent racial separation and discrimination, it is beyond stunning how mixed and friendly the audiences at these shows are.

My South African friends say it’s the shared love of the music that removes the barriers. And, indeed, I had many animated discussions with black  members of the audience and band, complete with the traditional handshakes and physical contact (totally foreign to me, but very easily adjusted to).

If you haven’t yet, watch the video above! The base player verbalizes something as he performs his solo, the drummer nearly falls off his chair, and the horn players are simply dynamite.

If you liked this post and don’t want to miss any great blues and jazz artists, sign up for my newsletter! It comes about once every week or two.

THE LOCALE: The Orbit

THE VIBE: These are serious jazz fans. Noisy when the bands aren’t playing; very respectful and attentive when they are. And wildly appreciative when a great band finishes a great set.

THE FOOD: Excellent, especially by jazz club standards where the food is often secondary (or even what seems an after-thought) to the music.